The gist: Blue Pan Pizza, a collaboration between Detroit natives Giles Flanigan and Jeff Smokevitch, opened last week in West Highland featuring an extensive board of pies dedicated to Detroit, Italy, Chicago and New York. “Because we offer four different styles of handcrafted pizza, not to mention a gluten-free version, plus really unique recipes and different flours for our dough, all of which are based on the regions of each pizza, I think you can say that we’re a pizzeria in the truest sense,” says Flanigan, whose partner, Smokevitch, also owns Brown Dog Pizza in Telluride. 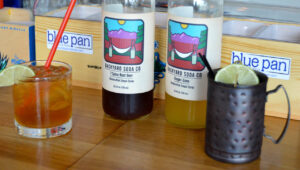 Here, at Blue Pan, the emphasis is on Detroit-style pizzas, several of which, like the Brooklyn Bridge (picture above) have racked up awards, including a first-place victory in the 2014 International Pizza Challenge, held every year in Las Vegas. Read the full article here!