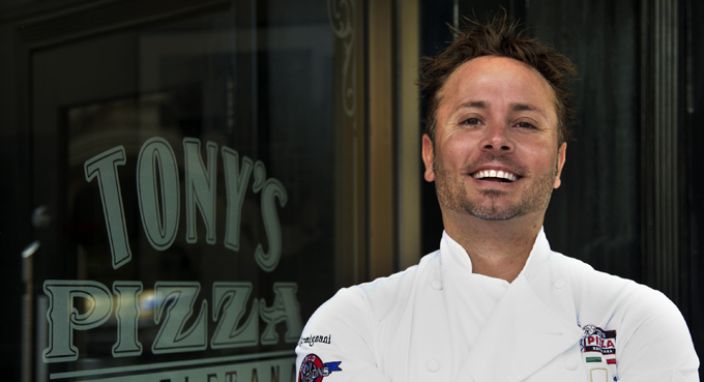 The scene: In recent years, dozens of places have sprung up nationwide claiming to make authentic Neopolitan pizza under the regulations of the Associazione Vera Pizza Napoletana (AVPN), or Real Neapolitan Pizza Association, a group that essentially licenses pizzerias worldwide and tries to preserve the strict pizza-making traditions of Naples, birthplace of the food. Before this trend, restaurants all over rolled out “New York-style” pizzas, and chains like California Pizza Kitchen took California-style pizza nationwide. But as far as I know, in spreading the pizza gospel, no one has ever attempted anything quite so audacious as Tony’s Pizza Napoletana in San Francisco’s North Beach neighborhood.

From the outside, Tony’s looks like just another popular neighborhood pizza joint occupying a prime corner, with a line out the door and sidewalk seating in good weather. Then you notice its next door sibling, Tony’s Coal Fired Pizza & Slice House, which is essentially a to-go version offering pizza by the slice. Next you notice the door to the upstairs pizza academy Tony runs, and you think, “maybe something a little more pizza-serious is going on here.” It is.

Tony Gemingnani, the first American ever to win the title of World Champion Pizza Maker at the World Pizza Cup in Naples (2007), has built a temple to pizza-making. His restaurant has seven different ovens using every conceivable fuel — coal, wood, gas and electric — at varied temperatures from 550 to 1000 degrees in an effort to turn out the best and most authentic versions of nine distinctly different regional styles of pizza. It’s a pizza-tasting trip around the world under one roof.